Written by Aaron Alexander on February 7, 2022.

On February 5th, 2022, Onewheel AZ teamed up with Riverbound Sports to participate in the 68th Annual Parada Del Sol Parade. This kicks off the return of the parade since it took off two years for the world to heal, which means the parade has been going strong for 70 years.

What is the Parada Del Sol Parade?

The annual parade & community celebration attracts over 30,000 people and provides an opportunity to showcase the history, participating school groups, bands, live musical entertainment, and great shopping. Plan on being in old town Scottsdale all day with your friends to experience Arizona’s old west entertainment.

How did Onewheel AZ get to participate?

We were fortunate enough to get an invite from Riverbound Sports and Paddle due to them being the largest Onewheel distributor in Arizona. In an effort to showcase floating on water and land, they reached out to our community and a plan was made. It couldn’t have been a more perfect team-up.

A beautiful day for the Riverbound and OWAZ community

Overall, it was a wonderful day with perfect weather at 60 degrees and full sun. The parade supposedly had over 50,000 spectators that cheered as a pack of over 40 Onewheel riders and paddleboard paddlers descended onto Old Town Scottsdale. Many people had never seen a Onewheel in person, and the kids that knew were smiling and cheering for our Community Float. We got to pass out some colorful leis with a 10% discount to Riverbound as well as Onewheel AZ stickers, and candy. It was awesome to see the smiles of our community members and all the people we got to interact with.

Moments from the Parade

Thanks to one of our community mods Darian Harmon, who also offers Arizona cinematography and photography services, we were blessed to have captured some great memories from the parade.

We made the local newspaper

We even got lucky enough to be featured in a story about the Parade Del Sol Parade in AZ Central. The picture is of Justin O. and Mycwyse ( who was riding a chair setup on a Onewheel in the parade).

Big Thanks to moderator Dan McGuire who always looks to capture the smiles our community is full of, you can see exactly how it looked from the “in parade” perspective.

The Future of the Float

Although we were thankful for the opportunity to participate in the 2022 Parada Del Sol Parade, we don’t know what the future looks like….But we do hope to get to participate next year with even more planning time, and you may even see a synchronized Onewheel operation taking it to the next level!

Thank you for taking the time to read about our community experience in the parade and if you have any suggestions for next year’s parade, let us know in the comments.

Aaron Alexander started Onewheel AZ on August 14th, 2017 shortly after getting his pre-order Onewheel Plus as a way to form group rides and unite other riders to explore AZ by Onewheel. 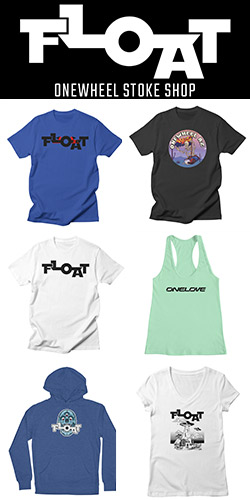 Onewheel AZ is the largest group of Onewheel riders in Arizona. We actively support the Onewheel growth of new riders to make one of our favorite activities as fun and as safe as possible. We have events, test and explore routes, and work to build a community that will support future regulations in a responsible manner. If you are filled with Stoke and Love meeting a great group of people, you’re in luck! #OWAZ

Find Us Floating in:

“Have FUN building the Onewheel community in Arizona while shredding at the maximum, but still safe and considerate level.”